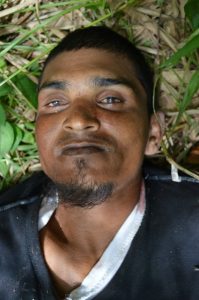 One of the suspected bandits

Two suspected bandits were shot dead and two others were arrested Friday morning shortly after they held three male labourers at gunpoint  and stole several items.

“Soon after the lawmen disembarked their boat, they were confronted by the now dead men who discharged several rounds at them ; the officers quickly adapted tactical positions ,returned fire and fatally wounded the men who have been positively identified by the victims as members of the gang who committed the robbery,” police said.

The lawmen said they went to a location where the robbery occurred and found the stolen items in a camouflaged aluminium boat. They are 23 sheep, 15 ducks, one solar panel, one radio,a quantity of rope, and other valuables. The items belong to a 50 year-old businessman of Vryheid,West Canje,Berbice. 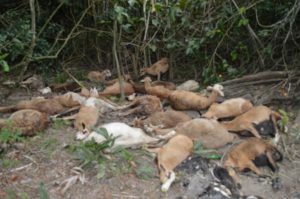 The tied sheep that were found in a boat.

Police said they also found one 12- gauge pump action shotgun, one .32 pistol, 11 live cartridges, and five live.32 rounds in possession of the bandits .Also three spent cartridges and a .32 spent shell were retrieved at the scene. 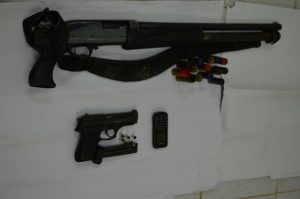 The guns recovered at the scene.