Guyana yet to decide on cheap oil products for domestic use 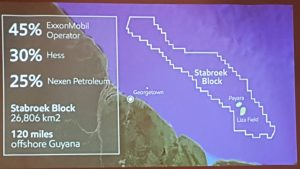 The Guyana government is yet to ascertain whether domestic consumers of oil fuels will pay less, although ExxonMobil will be required to satisfy the country’s daily oil consumption, Minister of Natural Resources Raphael Trotman said Thursday.

He told a news conference that Guyana’s premium quality oil will be sold to ExxonMobil with a specific amount of 13,000 to 15,000 barrels per day set aside for local fuel needs.

“Domestic production is guaranteed from the take so we are entitled to take free of cost what we need for domestic purposes without having to pay world market prices,” he said. Guyana will have to send that oil to a refinery to be processed into gasoline, diesel, kerosene, heavy fuel oil and other fuels for the local domestic and commercial markets.

However, the Minister of Natural Resources said Guyana’s oil consumption is expected to decline in the coming years as Guyana seeks to use more renewable energy and natural gas.

Trotman could not say definitively whether Guyanese will pay less for fuels. “It is the intention that we will get cheaper prices, yes, but much of that depends…,” he said, adding in Trinidad concessions and lower taxes had been granted to petroleum investors which were recently withdrawn.

“Oil is traded at a certain price and it is for the government to determine whether it wants to give its citizens a cheaper price or not. That is not a decision that I can make. It has to be based on sound macro-economic principles,” he said when asked by Demerara Waves Online News.

Trinidad and Tobago has already asked Guyana to send its oil to Petrotrin to be refined there, but Trotman said no decision has been taken.  Commercial oil production is expected to begin in 2020.

Currently, all the regulatory arrangements are being put in place for an oil and gas sector. These include the enactment of legislation to establish a Petroleum Commission and a Natural Resources Fund also known as a Sovereign Wealth Fund.