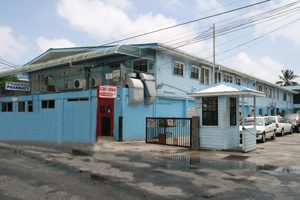 A  cashier attached to the Woodlands Hospital Susan Daniels and a man, who she allegedly falsely claimed had robbed her of GY$1.4 million belonging to the health institution, were arraigned on a charge of simple larceny.

The cashier, 33-year year old Susan Daniels, and 32- year old Anif Peters, denied the joint charge after it was read to them by City Magistrate, Judy Latchman.

the charge alleges that the Canal Number One and East LaPenitence resident on August 31 stole GY$1.4 million dollars from Woodlands Hospital, property of the hospital.

Daniels was also charged with  giving false information to police at Brickdam Police Station on September 1,  alleging that she was robbed knowing such information was false after an investigation was carried out.

To that charge Daniels pleaded her innocence by denying the charge.

The court heard from Police Prosecutor Inspector Gordon Mansfield that on the day in question, Daniels was responsible for taking the daily sales to the respective holding area but did not do that.

Afterwards, a report was made to the Brickdam Police station and an investigation was carried only to find out that found that the information given was allegedly false.

Peters was arrested due to the fact that Daniels had reported he was the person that had robbed her of the money.

Magistrate Latchman granted bail to Anif Peters in the sum of $100,000 while Susan Daniels was granted $200,000 bail.

Both defendants were ordered to return to court on December 4.