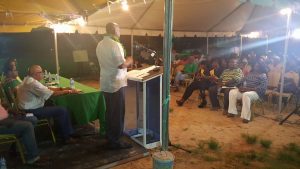 Political bickering between government and the opposition on Sunday appeared set to intensify, with Minister of State, Joseph Harmon calling on local government councils to resist attempts by People’s Progressive Party (PPP) council meetings to disrupt their meetings.

Addressing a community meeting at Mocha, as part of a countrywide outreach to explain President David Granger’s unilateral appointment of the Chairman of the Guyana Elections Commission (GECOM) and the stance being taken by the PPP,  Harmon vowed that “we are not backing down”.

“This level of disrespect showed in the  National Assembly, we are not accepting it. We will not accept it and that all I’m saying to you now at the level of the RDCs, NDCs and so on: just look out for that kind of behaviour and stop it. Stop it in its track. Do not allow that kind of behaviour to trickle down to anywhere else because lawlessness, disorderliness – we have no place for that in Guyana,” he said.

PPP parliamentarians last week Thursday raised placards and heckled President Granger as he was outlining his administration’s legislative agenda to the Parliament.

The State Minister said nothing must be done to damage the national pride that was heralded in with the APNU+AFC coalition’s electoral victory in May 2015.