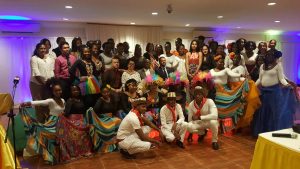 Colombia continues to train more Guyanese public officials to use Spanish, as part of an ongoing cooperation programme between the two countries.

Sixty participants in the 4th edition of Spanish as a Foreign Language Course for Public Officials completed the latest course that was conducted by Professor Nelson Giraldo through a cooperation agreement between the two South American countries that was signed in April, 2014.

Foreign Affairs Minister, Carl Greenidge observed that nationals of English-speaking Caribbean countries usually frown on Spanish-speakers from other parts of the region. “One of the handicaps of the Anglophone culture has to do with a tendency to judge persons on the basis of their capacity to use English itself so if you are an English speaker among…especially so in this Caribbean and have difficulty with verbs or difficulty with vocabulary. immediately you are assessed on that basis and so it tends to lead to a reluctance and unwillingness to expose oneself to perhaps criticism or ridicule by trying and then being seen to make a mistake,” he said.

Director-General of the Ministry of Foreign Affairs, Ambassador Audrey Jardine-Waddell remarked that during the four-month old long course provided an opportunity for the professor to share several aspects of Colombian culture with her staff and she hoped that he would be able to share Guyanese culture. “I think you are leaving here knowing more about Guyana than many of us here and I hope that you would be able to transmit to your own community what we have to offer and to encourage them to visit Guyana,” she said. Jardine-Waddell encouraged Colombians to visit Guyana especially since there is a visa abolition agreement.

Director of Cultural Affairs at Colombia’s Ministry of Foreign Affairs said the language programme which is also provided to Barbados, Grenada, Jamaica, Suriname, and Trinidad and Tobago is part of his country’s foreign policy strategy. “We are certain about the effectiveness of culture in consolidating a stronger relationship with the Caribbean region which is a top priority for Colombia’s foreign policy,” he said at the closing session held at Parc Rayne formerly Rahaman’s Park/ Rahaman’s Soda Factory.

The closing session was punctuated by Colombian music and dances by the participants who were clad in Colombian costumes.