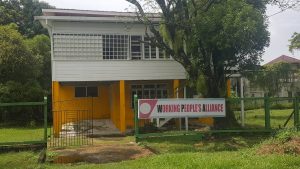 Targeting increased membership and greater visibility, the Working People’s Alliance- one of the small parties in the governing coalition- has said that its decision to be vocal on a wide range of issues after two years of quietude is rewarding the party.

“Perhaps, if we had done it two years ago, we would not have had the same results that we have had,” party executive member, Dr. David Hinds told a news conference on Wednesday when asked why the WPA did not openly support Dr. Rupert Roopnaraine while he was Minister of Education. The party now says that it will back Roopnaraine’s decision to remain a government minister despite his ill health.

Hinds said the WPA was wary of demonstrating a forceful profile even six months after the APNU+AFC coalition had taken office in May, 2015, his party would have been told that the government had just assumed office and it should have been given a chance to govern instead of “fighting them down”.

“Sometimes, in politics things have to gather and contradictions have to become clear and manifest and then you have the burst of energy that we have been having,”  he said. Among the successes that the WPA said it has reaped from its vocal stance include a formal request to the Minister of Natural Resources, Raphael Trotman for the ExxonMobil contract to be made public. “He hadn’t answered us for a month. Once we began to talk in public, we got an answer from him but more than that we now an invitation to go and meet…or he will come and meet with us,” he said.

Another reward, Hinds said, was President David Granger summoning the WPA to a meeting within a matter of  days- “that didn’t happen in the past”- followed by an executive meeting of A Partnership for National Unity (APNU) for the first time in two years resulting in a resolution of a number of problems.

The WPA said it has begun being assertive and taking independent positions in its own name as part of efforts to be the “voice of reason” and ensure that government sticks to its campaign promises. With some people feeling isolated from government’s policies and programmes, that small political party wants to be the mouthpiece for ordinary working people in communities across the country. “We want to articulate the aspiration and cries of Guyanese especially those who are at the bottom of the social ladder. “We feel that the time has come when we have to push our government to begin to take progressive decisions,” he said.

“The meeting decided that the rebuilding of the party should begin forthwith with the reactivating of its key organs, re-energising existing members and the recruitment of new members and allies. It was also decided that the party should begin groundings in communities across the country to hear from the people about their collective problems and to engage in public education on national issues,” the party said in a statement.

During the news conference Dr. Hinds refused to tell reporters where the WPA’s general members meeting was held on Sunday, July 23, 2017 and how many persons attended. “That’s a number we would like to keep internally… yes, yes. That’s party business…That’s our internal business. A political party has to look after its own internal intelligence,” he said.

During its heyday in the 1970s and early 1980s, the WPA had attracted broad-based multi-racial support in its quest to remove the then Forbes Burnham-led People’s National Congress (PNC) administration. At the height of planned civil rebellion to  dislodge the PNC from office, WPA leader Dr. Walter Rodney was killed on June 13, 1980 when a bomb-in-walkie-talkie exploded in his lap while he was sitting in his car a short distance from the Georgetown Prison.

The WPA maintains that the PNC, now PNC-Reform with which it is a partner in APNU, was responsible for Rodney’s assassination.