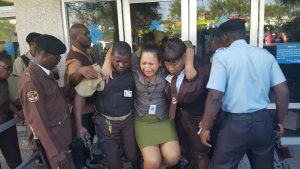 A bandit was killed and another captured unhurt during an exchange of gunfire at an attempted robbery at Republic Bank (Guyana), Water Street, Georgetown.

Head of the Criminal Investigations Department, Senior Superintendent, Wendell Blanhum said the  bandit was shot in his chest and he succumbed. He was 25 years old and lived at Eccles, East Bank Demerara.

Blanhum said one of the suspects , who was shot in both legs, is a bank employee who was wearing a dread lock wig. A suspect who was detained outside the bank has been cooperating with the police, he added.

The car that transported the bandits has been also held by police and the driver,  who reported earlier Tuesday that his car had been hijacked, has been also detained. “Indeed a report was filed but we are not ruling him out as a suspect that he would have colluded with these men,” Blanhum said.

‘A’ Division Commander, Marlon Chapman said four firearms including three 9 MM handguns and one .40 gun were recovered in the aftermath of the attempted robbery.

“They got no money,” Chapman told Demerara Waves Online News. The failed robbery was confirmed by Republic Bank which also said they were being treated and counselled,

“All of our staff have been accounted for and, where required, have received medical treatment. The bandits were unsuccessful in their robbery attempt. Our greatest concern at this point rests upon the safety and well-being of our staff and customers. We have initiated trauma assistance processes for staff and shall continue to work with law enforcement officials in their investigations,”  Republic Bank’s Managing Director, Richard Sammy was quoted as saying in a bank statement. 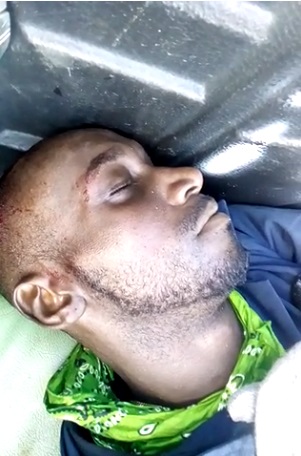 The bank robber who was shot and subsequently died at the Georgetown Public Hospital while receiving treatment.

Chapman said the bandits gained entry to the lower flat of the bank by entering the southern Automatic Teller Machine (ATM). The bank alarm went off, he said, and the security guards and the bandits exchanged gunfire, even as police responded promptly and continued the shootout.” Our information is that they went into ATM and found their way inside the bank and attempted to rob the bank. The staff were in another section of the bank,” Chapman said.

The Bank, in its statement, said “there was an attempted robbery at its Water Street Branch, Georgetown, early this morning, July 4. The attempt was made as staff entered the Branch.”

In the end,  Chapman said one of the bandits was shot and died while receiving attention at the Georgetown Public Hospital Corporation and another was arrested. The Assistant Commissioner of Police said a bank employee was escorted to a police station for questioning but he had no details.

Demerara Waves Online News was told that one of the bandits fled to a small eatery aback the Vendors Mall opposite the bank and pretended he was a chef when he was accosted.

Traumatised staff members and customers were eventually allowed to leave the bank through a shattered door.

After the crime scene was protected by security guards and heavily armed police, and the curious onlookers were removed from the area, Crime Scene Investigators were seen marking the locations where several spent shells, amounting to at least 20, were seen.

Republic Bank and the Assistant Police Commissioner credited the police and security guards with quickly containing the situation. 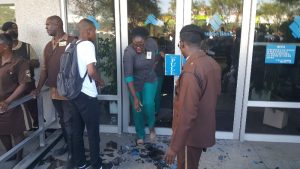 “The Bank extends gratitude to the law enforcement agencies and security personnel for their alert response, which prevented the situation from escalating further,” the bank said. The Divisional Commander said “‘it was good work on the part of the police.”

Republic Bank has closed its Water Street Branch until further notice and advises all customers that their banking business can be conducted at all other branches.