Money hard to get to build hydro-power stations- Finance Minister 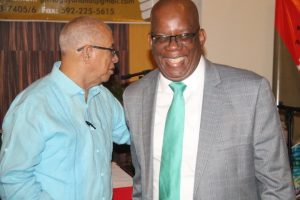 Finance Minister, Winston Jordan Thursday night ruled out international financing for the construction of hydro-power stations, in response to concerns by Guyana’s private sector that government was foot-dragging on developing that renewable energy source.

“We will love to have as many hydro facilities in this country as we can, but it is going to always fall on capacity, technology and most important financing…Multilateral banks and these aren’t financing these hydro-powers and these big damns anymore. Many of them have gone out of business where this is concerned,” he said.

He shunned calls by former President of the Private Sector Commission (PSC), Retired Major General Norman Mc Lean to invest in hydro-power stations across the country to serve mines and reduce  Guyana’s overall cost of production to make goods and services competitive. Instead, the Finance Minister said he was willing to consider ideas for using Guyana’s oil revenues that are expected to flow from 2020 to finance hydro-power development.

“For me, we need to have more practicality. If you said to me: ‘listen you see some of that money coming from oil, I want you all, in the context of the diversification, look at a falls, partner with somebody and use some of that resource  to look at a falls’, now we talking something.

But don’t tell me ‘you have all of these waterfalls and you not doing anything about them’. We’d love to do something,” the Finance Minister.

Interacting with business leaders at the Guyana Manufacturing and Services Association (GMSA) dinner, Jordan said Norway no longer has an appetite for the proposed 165 kilowatt Amaila Falls Hydro-power station because Norwegian consultants have found several areas of concern.

The former PSC Chairman noted that there are 80 potential hydro-power sites and he said he “cannot understand after three trials” including the “half-baked” Amaila Falls project there is no hydro power station. “I really don’t understand with the Norway money, with the fact that it already being environmentally funded, why we are not moving to hydro to bring cheap power so that our manufacturers can get cheap electricity,” he said. The former Human Resources Director at the now closed Omai Gold Mines noted that that electricity generation there had accounted for 55 percent of operational costs.

The Amaila Falls Hydro-power station was up to three years ago budgeted to cost almost US$1 billion- monies Jordan said international financial institutions are no longer providing to such projects.  The Finance Minister also noted that the US$80 million payment that Norway owes Guyana for the preservation of its standing tropical forests to help with absorption of carbon emissions, would be insufficient to build a large hydro-power station. “Norway has only given us 80 million dollars, probably just good enough for a small hydro. They haven’t given you a billion dollars to build Amaila Falls so when you say you have the Norway money, I don’t know what you mean by that,” Jordan said.

He challenged Mc Lean to find an investor in a hydro-power  station and the Guyana government would “run” with the project.