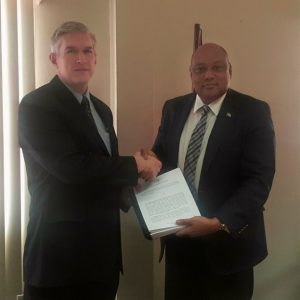 ExxonMobil will soon formally make its Final Investment Decision (FID) now that Guyana has issued a production licence for the Liza.

The license was issued and and the Liza Phase One development approved by the Ministry of Natural Resources. Prior to an official release, Minister of Natural Resources told the House during debate on the Petroleum Commission of Guyana Bill that “government has taken a decision to issue that licence. This follows on the advice of world-renowned experts who advised that it was possible to do so.” ExxonMobil in December, 2016 had applied for the production license and approval of its development plan.

After ExxonMobil makes its FID, the company will accelerate the purchasing, contracting and installation of more equipment for commercial oil production in 2020. Company officials have estimated that at the end of that process, the company is expected to spend at least US$5 billion.

The Ministry of Natural Resources said following the approval of the Production Licence and environmental permit, it is expected that ExxonMobil and co-venturers Nexen and Hess will make a final investment decision on the Liza Phase 1 development.

The Liza Phase 1 development plan includes completion of a floating production, storage and offloading (FPSO) vessel designed to produce up to 120,000 barrels of oil per day.