Granger rejects second list of GECOM nominees ; Jagdeo warns of “other consequences for which the President will be responsible” 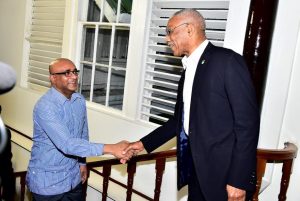 FLASH BACK: President David Granger greets Opposition Leader Bharrat Jagdeo on his arrival at State House for consultations on the appointment of the Chancellor of the Judiciary and the Chief Justice,

Opposition Leader Bharrat Jagdeo says President David Granger has rejected a second list of nominees for the post of Chairman of the Guyana Elections Commission.

Jagdeo reiterated his warning that legal action and other steps would be taken if Granger goes ahead and names a Chairperson unilaterally.

“The Leader of the Opposition hereby assures that should the President proceed along this unconstitutional, undemocratic and diabolical path there will be litigation and other consequences for which the President will be responsible.”

Following is the full text of the Leader of the Opposition’s statement.

“Today, the 2 day of June 2017, the Leader of the Opposition received a letter from President David Granger informing him that the list of six persons, which the Leader of the Opposition submitted to the President on 2nd May 2017, for appointment of a Chairman of the Guyana Election Commission (GECOM), in accordance with Article 161 (2) of the Constitution, is “unacceptable”.

Significantly, the letter does not indicate what next steps, if any the President requires to be taken.

This letter was received a few hours after the Leader of the Opposition concluded a press conference, at which he was critical of the President’s overall approach to this issue, which he considers to be of fundamental national importance.

The Leader of the Opposition notes with deep concern the cavalier and callous manner in which the President continues to express no confidence in and denigrate the professional reputation, integrity and competence of Guyanese of high calibre who have rendered sterling contributions to the development of our country and in service to our people and who have distinguished themselves in their individual endeavours and pursuits.

We reiterate our apprehension that the President is bent on unilaterally selecting a person of his choice in violation of the letter and spirit of Article 161 (2) of the Constitution and indeed, the Carter Formula. The Leader of the Opposition hereby assures that should the President proceed along this unconstitutional, undemocratic and diabolical path there will be litigation and other consequences for which the President will be responsible.”

The post became vacant with the resignation of Dr. Steve Surujbally in February, 2017 after being 15 years at the helm.

When the President had rejected the first list he had said that none of them had been in keeping with Guyana’s constitution that, he says, weighs heavily in favour of a current judge, retired judge or someone eligible to be appointed judge.

Weeks later on March 14, 2017 before Jagdeo submitted the second list, Granger added several other requirements of the person who should become the next GECOM Chairman. “That person will not be an activist in any form (gender, racial, religious etc)” and “that person should not have any political affiliation or should not belong to any political party in any form, apparent or hidden,” Granger has said.

2017-06-02
Denis Chabrol
Previous: 2% royalty can’t solve our jobs problem …come clean on full contract—Jagdeo
Next: “Every member of the list suggested must conform to the criteria…”- Granger, as he calls on Jagdeo to produce third list of nominees for GECOM Chairman