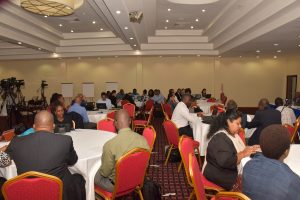 A section of he participants of the United Nation’s Environment (UN Environment) Regional Capacity Building Workshop on Supporting Countries to advance their National Adaptation Plan (NAP), which is being held at the Ramada Princess Hotel.

Guyana will over the next three days play host to sister Caribbean countries and another nine International agencies as part of a Climate Change National Adaption Plan (NAP) training workshop for public officials.

Guyana’s Permanent Secretaries of the Ministries of Communities and Public Infrastructure have been identified to represent the host country in Regional conference aimed at strengthening the capacity of public officials to develop NAPS, “through the identification of the main tools available to develop these plans and the exchange of experiences and lessons learned.”

Minister of State Joseph Harmon, in welcoming the regional participant,s used the opportunity to point to the high premium with which Guyana places on Climate Change, adaptation and mitigation.

He said under the Green State Strategy, Guyana’s Head of State, David Granger has prioritized the setting out of a framework of resilient infrastructure and spatial development that which speaks to coastal resilience while taking into account national security interests.

Announcing Guyana’s representatives to the workshop, Minister Harmon further spoke to the integration of climate risk and adaption measures not only in development plans but also in facilitating decentralization efforts from national to community level. 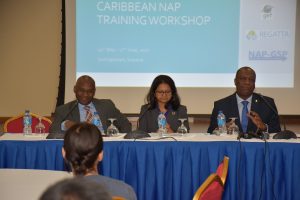 According to the Minister of State, “the Government of Guyana, recognises the importance of reducing our risks and increasing our resilience to climate change, and has taken to steps for the integration of climate risk into national development planning, policies and programmes, Guyana has elaborated in its Nationally Determined Contributions to the Paris Agreement, unconditional contributions for adaptation.”

He pointed to several of Guyana’s tangible initiatives being pursued under the accord and pointed to mainstreaming disaster risk management in the agricultural sector, sea defences as well as shifting of agricultural production from the coast to the hinterland as an adaptation strategy to climate change.

He spoke, too, to the need for improved drainage and irrigation for coastal communities and water resources management and water harvesting for hinterland communities by the Ministry of Agriculture.

The Ministry of the Presidency, meanwhile, said Head of Caribbean Sub Regional Office of the United Nations Environment Programme, Mr. Vincent Sweeney, in his remarks, said that the workshop is part of the joint UNDP-UN Environment global project to support national adaptation plans. He noted that the initiative started in 2013 with a first phase to support the development of national adaptation plans in least developed countries.

“The objective here is to strengthen capacities for the elaboration of these plans, and in this sense, this initiative has the support and experience of the Regional Gateway for Technology Transfer and Climate Change Action in Latin America and the Caribbean (known as REGATTA). REGATTA’s main objective, as the name suggests, is to strengthen capacities, and promote and exchange knowledge on climate change technologies and experiences in the areas of mitigation and adaptation for the Latin American and Caribbean region,” he said.

According to Mr. Sweeney, one of the lessons learnt from this initiative is that while, only a few years ago, capacity building required sharing basic information on what was climate change, whether it was actually occurring and why adaptation plans are necessary; now, it requires more focused knowledge on specific aspects, and above all it is paramount to know experiences and learn from what has and has not worked in other places.

Speaking to some of the challenges, Mr. Sweeney said that while much progress has been made in policy-making and the development of climate change institutions in all countries in the region, the integration and coordination of climate policies with other sectoral policies remains a challenge because of the operational difficulties involved, and also because sectoral policy and climate change have often conflicting or poorly aligned objectives, for instance, forest protection policy versus agricultural production policy). The forum therefore, he said, will provide insights and knowledge, which can help the various countries to evaluate themselves and examine where they need to be.

United Nations Development Fund (UNDP) Deputy Resident, Shabnan Mallick praised Guyana’s efforts on the global stage in its Climate Change fight and pointed to the development of a Green State Strategy which she said would build on the benefits accrued from the Low Carbon Development Strategy (LCDS).

She cautioned, however, that in the implementation of the Green Strategy, government must be cognizant of the need for widespread consultations with the populace.

The UNDP representative, in speaking to that organization’s contribution to the climate change fight, said the entity has plugged some US$150M into the efforts across 20 countries.

Representatives participating in the three day confab being held at the Princess Ramada International Hotel and Casino, Providence, East Bank Demerara will benefit from presentations in several areas including national budgeting and adaption as well as access to available climate change mitigation funds.

Countries represented at the confab include Antigua and Barbuda, Bahamas, Belize, Dominica, Grenada, Haiti, Jamaica, St Kitts and Nevis, Suriname, Trinidad and Tobago and St Lucia among others.