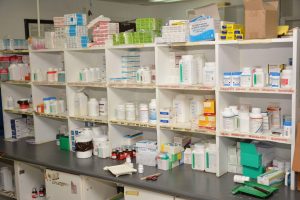 The Parliamentary Committee on Social Services today (May 3, 2017) found themselves at loggerheads with the Chairperson of the Board of Directors of the Georgetown Public Hospital Corporation (GPHC), Kesaundra Alves, who refused to allow the members of the team from the Peoples Progressive Party (PPP) into the institution’s drug bond for a site visit.

Chairperson of the Parliamentary Committee, PPP Member of Parliament, Dr Vindiya Persaud was forced to barge her way into the facility along with her colleague Parliamentarians while members of the team from the Government abstained from viewing the facility, this in spite of reports of severe drug shortages at GPHC. 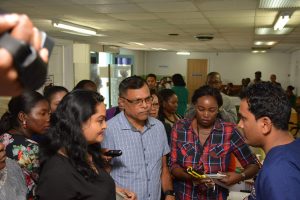 She and her team were shortly after booted from GPHC’s drug bond.

Demerara Waves understands that ahead of the tour, the members of the Parliamentary Committee were informed that the visit would focus on only four sections of GPHC, namely the Paediatric Unit, Surgical Outpatient, Cardiac Intensive Care Unit and the Accident and Emergency departments.

The team visited GPHC with a media entourage but when the Opposition Members of Parliament attempted to deviate and inspect the Drug Bond this was objected to by Alves since, according to her, that department was not prepared for the visit.

A forceful Dr Persaud and Committee Members Dr Vishwa Mahadeo and Aliset Charlie eventually made their way into the facility despite the protestations on the part of the hospital staff.

The fiasco eventually led to the intervention of GPHC’s Chief Executive Officer, Allan Johnson, who booted Dr Persaud and her colleagues from inside the drugs bond.

The Chairperson of the Parliamentary Committee later lamented to media operatives that the team expected an unfettered tour of the facilty. “What the Chair of the Board said to me was that we weren’t told that you wanted to go there so they didn’t prepare but it doesn’t need to be prepared. We are here to see things as they are and that is why I went in despite of their protestation,” according to Dr Persaud.

The team was also facilitated by Director of Emergency Services Dr Zulfikar Bux.
He told the visiting teams of shortcomings at the hospital with the more critical challenges being overcrowding at GPHC due in part to referrrals from other hospitals.

According to Dr Bux, the 18 bed A&E unit of the Hospital is strained to service the more than patients treated at the facility on a daily basis.

He explained that an ideal ratio of patient to nurses in a facility such as GPHC in a low income country is 5:1 but at GPHC each nurse is expected to treat with 10 patients.

The same, he said, obtains from Doctors at the A&E department.

According to Dr Bux, there are currently 16 doctors at the facility in a given 24 hour period and this was not ideal since each doctor would inherently end up seeing approximately 10 patients each.

On the matter of drug shortages, the Director of GPHC’s emergency services conceded that this was indeed a problem but not as severe as is made out in media reports. According to Dr Bux, there has recently been a consistent supply of drugs, despite recent hiccups which led to some shortages, “not to the point where it is affecting us.”

The team also visited the Hospital’s pharmacy and was informed by Senior Pharmacist, Jenelle Welch, that there are in fact drug shortages that have affected the operations of the hospital.

This, she stressed, was due in part to the patient load which is compounded by inconsistent supply of the pharmaceuticals.

As it relates to drugs currently out of stock, Welch identified immunoglobulin, midazolam, fortum, and insulin, aspirins, metoprolol (for cardiac patients) and atorvastatin among others.

Director of Finance, Ronald Charles sought to provide team with an update on its drug procurement methods at the Health Institutions.