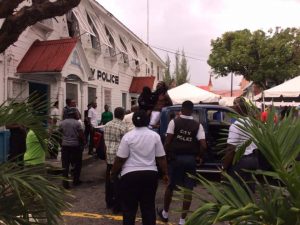 Mark Moseley about to be whisked away from City Hall’s compound Friday afternoon.

A man, who allegedly robbed a passerby in commercial Georgetown, was shot and injured after he refused to heed calls for him to halt, City Police said.

The man was shot by City Constabulary Corporal, Cadogan who was on duty at Robb Street and was proceeding to Avenue of the Republiuc when he heard shouts of “thief, thief”, a senior constabulary officer told reporters.

The suspect has been identified as Mark Moseley. Police said a wallet containing an unknown amount of cash that belongs to the pensioner was recovered from the suspect who moments before had left a cambio.

City Constabulary Assistant Superintendent of Police, Cheryl Bovell said Cadogan saw the suspect running along Avenue of the Republic and he called on him to stop but he refused.

“He paid the corporal no heed and proceeded public spirited persons gave a chase also and a round was discharged and he was hit in his left foot,” Bovell said.

The senior officer said he the suspected robber was taken to the City Constabulary’s headquarters from where he was transported to the Georgetown Public Hospital Corporation.

While the ma was in custody, police said he behaved disorderly attempted to take away a firearm from one of the ranks and jumped the counter and threatened to kill the officers.

“We had to get enforcement to contain him,” she said, adding that national police were summoned to assist in dealing with the situation.