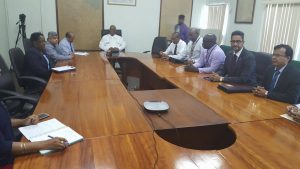 The Bank of Guyana (BoG) was Friday preparing to possibly more foreign exchange on the local market and Finance Minister, Winston Jordan did not rule out the closure of retention accounts of exporters to stem foreign exchange hoarding at a time when the local economy is suffering from a US$30 million decline in export earnings.

After a meeting with top officials of the Guyana Association of Bankers (GAB), the Finance Minister said the bankers would meet with the Bank of Guyana next week Thursday to ascertain what more the commercial banks can do and what the Central Bank can do to “support them to get them over this hump” during this period of seasonal shortfall.  “We want to ensure that there is a legitimate need because, as you know, there is going to be excessive demand from all sources,” he said.

GAB Head, Eton Chester declined to speak with the media as he was leaving the Finance Ministry’s Boardroom where the meeting was held.

The Finance Minister said the banks would be expected to “weed out” illegitimate need for foreign currency. Jordan said the banks had in the past tried to manage the rate at GYD$210 to US$1.00, until they spotted a spike late last year.  He hoped that the banks could collectively trust each other to fix the rate rather than attempting to break that agreement.

He could not say how much US dollars the Central Bank has put on the local market for the year and how much money is being allegedly “hoarded” by some exporters in foreign exchange retention accounts to facilitate their purchase of manufacturing inputs. ““We know what the figure is but I can’t tell you what the figure is,” he said.

The Finance Minister said the Central Bank would first seek to persuade those account holders to use their funds instead of purchasing from the market to avoid a run on the rate. If that fails, he said the Bank of Guyana’s Board would have to consider ordering the closure of those accounts. “We don’t want to use a heavy hammer to kill an ant really but what I’m saying it is a tool that is available to you. In other words, what the government has done so far is urge moral suasion but I mean there’s a limit to moral suasion at a time when the rate will deteriorate then you have to do more than just moral suasion,” he said.

Dr. Ganga and the Finance Minister, meanwhile, appealed to the media to stop contributing to speculation in the foreign exchange market because that could result in a further devaluation of the Guyana dollar which would in turn fuel inflation and a rise in interest rates.

Ganga conceded that remittance of profits and even some of the working balances by companies like Digicel (Guyana) Limited and Guyana Telephone and Telegraph (GTT) was putting some pressure on the exchange rate. “It will affect because it is not within their cycle of remitting which we would have already indicated so they come in at a time when there is a very low period in terms of foreign exchange and when the demand is escalating you are also adding to it and it is not within your period of remitting and that could have been adding to the pressure,” he said

Ganga said the Central Bank was not aware that Chinese stores from which Cuban traders mostly purchase their goods in US dollars was not circulating their monies in the local economy.

Asked what are some of the Guyana government’s medium to long-term plans to earn more foreign exchange, the Finance Minister hinted that oil production in 2020 will be a major source of foreign currency.

To prepare Guyana for the export of large quantities of fruits, vegetables and meat, he said Guyana has borrowed funds to improve its laboratories. He plugged the importance of large plantations of high quality produce.

He said others include value-added production of wood and clay-bricks for the housing sector, the privatisation of some of the Guyana Sugar Corporation’s operations, chief among them the Skeldon Estate. “There are interests in various aspects of Guysuco, many of those interests would, perhaps, stay in sugar, some of the would, perhaps, be in other areas,” he said. He added that government would continue to fund some of the transition plans until those entities begin earning foreign exchange.

He hoped that, despite the collapse of the Venezuelan rice market,  there will be increased rice exports.

The production and export of manganese is expected to begin next year.