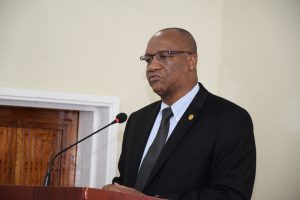 The way in which small businesses, including farmers, can easier draw down funding from the government-run Small Business Bureau is to be overhauled because Norway’s financing is beset by cumbersome conditions, says Minister of State Joseph Harmon.

Speaking with residents at Wales-Patentia at a recent outreach to meet with sugar industry workers and residents, he said President David Granger has been spearheading efforts to ascertain what can be done to provide loans to businesses.

“We were looking at the Small Business Bureau and to change the way it is structured,” he said, noting that the funds at that entity have come from Norway as compensation for Guyana’s maintenance of its standing forests. He said accessing the funds would require training and satisfy the conditions of banks, much to the detriment of the beneficiaries.

“In fact what is happening, it is really not serving the purpose and, therefore, what we ask is that we review that arrangement in addition to which the government will put some additional funds into that programme so that small farmers like you , people who are now getting into business can have an easier buy-in to financing rather than facing the banks,” he said. He said amounts could range from GYD$1 to GYD$5 million.

Government has already set aside GYD$50 million in the 2017 National Budget for small business development.

Harmon was at the time responding to concerns by an attendee that government was not providing financing to farmers.  “Why the government doesn’t invest in this agriculture thing? So you create jobs in the same environment and the government will be better off at the end of the day. For the poor man to start from scratch, you got to get money, you got to get equipment,” one of the attendees said.

Minister of Agriculture, Noel Holder said already plans are being finalized for the New Guyana Marketing Corporation to purchase and collect plantains from farmers at their farms. He said the plantains would be graded and the best quality would be sold to leading hotels such as the Pegasus and Marriott, and the remainder would be used to make plantain chips and plantain flour.

Holder also said when the Guyana-Brazil road is constructed, numerous trucks taking Brazilian products through Guyana for export via the Atlantic Ocean would not like to return empty. Holder said there is scope for the trucks to take back rice, sugar, plantains and bananas can be taken back to Manuas which  has a market of about three million persons.