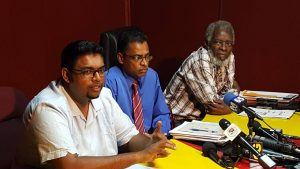 The People’s Progressive Party (PPP) on Monday warned of increased tension and unrest by sugar workers if they are sacked due to the closure of more sugar estates, even as that party demanded that a socio-economic impact study be done before government decides on the Guyana Sugar Corporation’s (GuySuco) future.

“Unquestionably, this will cause a confrontation. If we use one current example- the parking meters- and  we use a feature of this Granger government, no consultation, you see where it leads,”  PPP Executive Committee member, Roger Luncheon told a news conference.

Since coming to power in May 2015, government has closed Wales Sugar Estate, and GuySuco has made arrangements to deploy some of the workers at Utitvulgt Estate, West Coast Demerara.

The Guyana government has said the national treasury could not afford to spend billions of dollars annually on a loss-making and highly indebted sugar industry whose annual production continues to plummet. However,  sugar industry advocates have argued that GuySuco plays key roles in employment, drainage and irrigation, health care and earning much needed foreign exchange.

The former Head of the Presidential Secretariat said it was too early to determine where the parking meter issue will end up, but he noted that “more and more mobilization of anti-parking meter sentiment.”

Luncheon feared that protests would erupt across the village-economy based sugar belt of Guyana because “this isn’t paying  money for parking; his is people’s livelihoods.” He said even if the PPP does not mobilize protest actions the workers would automatically rise up to fight for their survival.

“There is no doubt in or mind even if the People’s Progressive Party is not in the forefront of leading the protests against this arbitrary course that this government is undertaking, we can assume that the same sentiment that put the protesters on the streets of Georgetown will have protesters all over the sugar belt were this course of action to be continued,” he said.

The PPP’s Irfan Ali said politically the PPP will be demanding various options that are before us” but those options will be in the “interest of the workers, the industry and the country.”

He and Luncheon insisted that there must be a socio-economic study and economic feasibility study are completed before any decision is taken.  “We are making that call that no estate should be closed because the studies that should inform such decisions have not been completed,” said Ally.

Head of the Guyana Rice Producers Association (GRPA), Dharamkumar Seeraj said the diversification of some Guysuco estates to produce paddy and milk have failed before those projects have started. He explained that paddy cultivation would require the  grading of several feet of topsoil of sugarcane beds to fill existing drains, and when that topsoil is removed all that will be left is pegasse that will be unsuitable for rice cultivation.