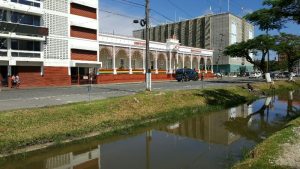 With no major change in the parking meter rates for the vast majority of motorists, the boycott of the meters continued Monday.

The resumption of paid parking after one week of consultations saw most designated areas being vacant.

Except for a 50 percent reduction for eight hours of parking, shorter durations have been retained at a minimum of GYD $50 for 15 minutes. 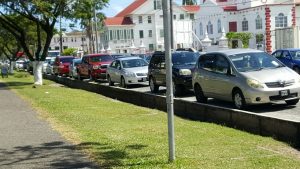 A section of Main Street, where there are no parking meters, being used by motorists.

On Avenue of the Republic,  Main, Water, Robb and Church Streets very few or no vehicles occupied the parking spaces

It, however, appeared that numerous motorists opted to park on Main Street north of Quamina Street where there are no parking meters – at least for the time being.

Lawyers for the Movement Against Parking Meters at the weekend hoped that conditions would emerge to force Smart City Solutions and the Mayor and City Council to scrap their 80- 20 contract.

Two cases against the deal are pending in the High Court. The likelihood of contempt of court proccedings against Smart City was raised at a public forum at the weekend.

The Movement Against Parking Meters maintains that the agreement violates municipal and national laws and is the product of a corrupt deal.

However, City Hall maintains the agreement is a sound one and Georgetown badly needs the money to fix and maintain drainage, roads and other facilities.