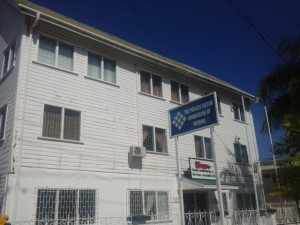 The Private Sector Commission (PSC)  says it has no confidence in government’s handling of the economy and has accused it of political interference in the judiciary and creating the conditions to violate the constitutional rights of persons through the State Assets Recovery Act.

The PSC charged that the economy is in a downward spiral, resulting in Guyanese selling and moving their assets out of Guyana.

“The members of the business community present expressed a lack of confidence in the manner the Government is managing the economy. This is reflected in the flight of capital from Guyana and the lack of significant new investments in the last 2 years,” the umbrella business organisation said in a statement that was issued the same day Caricom leaders began their two-day mid-term summit in Guyana.

Checks at commercial banks on Thursday showed that there is still a lingering shortage of foreign exchange to wire overseas, but there is cash available over the counter. One bank was selling US$1.00 for GYD$210 over the counter and GYD$215 for wire transfers and drafts.  The Bank of Guyana had recently issued instructions for the spread to be between GYD$210 (buying) and GYD$213 (selling).

Reasons cited by financial industry experts for the acute foreign exchange shortage are low foreign exchange earnings from sugar and rice, capital flight and increased purchases of foreign exchange by persons and businesses from neighbouring Suriname, Trinidad and Tobago, and Barbados.

Other signs of bad economic management, the PSC says, are  dwindling real estate values,  more properties on the market for sale and “rapidly” eroding wealth.

Areas of serious concerned listed by the PSC are “crippling new taxes” for the mining sector and the institution of Value Added Tax (VAT) on necessities.

The PSC called on government to urgently fix the conditions to ensure businesses thrive and the national economy grows- all with the aim of reversing  growing lack of confidence.

“We would like to see Government create the enabling environment and engage the business community much more so that together we can facilitate the creation of employment opportunities, have wage growth and put in measures to increase wealth of all Guyanese.

Guyana cannot continue to improve and sustain growth, if investors’ confidence continues to be eroded. The trajectory in which the country is heading at the moment does not inspire such confidence,” the business grouping said after a meeting with a wide cross section of its members on Monday February 13, 2017.

The PSC acknowledged the need to recover assets that have been stolen from the State, but warned that that the SARA Bill- which “provides too much unchecked power to the Agency” because the Director of SARA supersedes the Courts, the Commissioner of Police and the Commissioner General of GRA- provides a loophole for political harassment, and the violation of banking secrecy and constitutional rights.

“The Bill will impede business progress as it allows for harassment and political victimization of legitimate businesses. The Bill allows staff of the Agency to arbitrarily look at private accounts and financial information of citizens without due process. This Bill should be recalled and amended to be consistent with the constitutional rights of citizens,” states the PSC.

However, the Ministry of the Presidency sent a strong signal that the SARA Bill would be passed immediately and suggested that the PSC was biased. “The opinions of any Private Sector Commission or equivalent should be principled, balanced and near impartial. Honest business prefers a fair and principled environment. The passage of this Bill will allow the new Agency to direct a laser-like focus on such assets obtained through corruption; the loss of which has frustrated the development of this country,” the  Ministry of the Presidency has said.

Government further stated that the SARA Bill is in keeping with Article 54 (1) (c) of the United Nations’ Convention Against Corruption (UNCAC), that requires signatory nations to “consider taking such measures as may be necessary to allow confiscation of property without criminal conviction.

“Given the purposes of the Bill and the damaging losses to the economy as stated above, it is imperative that the Bill passed immediately. The scale of corruption discovered by SARU, to date, is astounding. The Guyanese population is eager to see the country’s assets recovered and appropriate action taken against the perpetrators of corruption. The SARA Bill is geared toward these purposes,” government said.

The People’s Progressive Party (PPP) has also concerns similar to those of the PSC about the motive behind the State Assets Recovery Agency instead of crafting crime prevention strategies to go after the “real criminals.” “This Government’s emphasis is on assembling special prosecutors and fast-tracking the SARA Bill which will be used to target not just political opponents but the business community.”

Government has said  that before the change of Government, the nation was losing GYD$28-GYD$35 billion each year through procurement fraud. With regard to illicit capital flight, the nation was losing GYD$90 billion every year. Furthermore, the underground economy caused the nation to lose $188 billion per year. “This adds up to a grand total of GYD$306-GYD$313 billion per year, which is a conservative figure as according to several international agencies, this amount is grossly understated.”

Weeks after Attorney General and Minister of Legal Affairs, Basil Williams came in for sharp criticism by, among others, Prime Minister Moses Nagamoootoo and Senior Counsel Ralph Ramkarran over remarks he had made about the Chancellor of the Judiciary, Carl Singh; the PSC said allegations of political involvement in the judicial system were noted with great concern.”

“There must be a separation of the Government and the Judicial System and Government must ensure full autonomy and adequate financial resources for a properly functioning system. There is need for judges to be appointed at all levels especially at the Court of Appeal and the High Court. In addition, the presence of one Commercial Judge to handle the thousands of cases annually is inadequate. This needs to be addressed,” the PSC said.

The Judicial Service Commission (JSC) has recommended that several persons be appointed judges, but President David Granger is yet to act on that recommendation.

The PSC members called for a Commission of Inquiry into the parking meter fiasco to ascertain whether the Mayor and City Council can legally enter into an agreement with Smart City Solutions, if there was any feasibility study,  how earnings will be accounted for, the role of Government in each stage of the project, the tendering and approval process, and the extent of a legal review of the contract. Given the obscurity of the process, the consensus was that the contract be rescinded in its entirety.

The parking meter project will now be subjected to a judicial review on several grounds before Justice Brassington Reynolds.