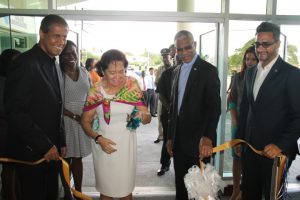 President David Granger on Sunday called on the banking sector to address several deficiencies that have been identified by the World Bank and singled out mobile banking as a major tool that could decentralize banking services to persons especially in remote parts of Guyana.

“Guyana, despite the increase in the number of bank branches, continues to rank behind our Caribbean counterparts in extending financial services,” he said at the formal opening of the GYD$1.5 billion branch of Republic Bank (Guyana ) Limited at Triumph, East Coast Demerara.

He said World Bank statistics show that in 2015 Guyana had 8.4 commercial bank branches per 100,000 persons, a penetration that compares unfavourably with Suriname which has 11.1 percent and Trinidad and Tobago with 13 percent. Granger said the figures show that Guyana has fewer Automated Teller Machines (ATMs) number 17 per 100,000 compared to 41 in Trinidad and Tobago.

“These are deficiencies that we must address,” said Granger, who took up the Chairmanship of the 15-nation Caribbean Community (Caricom) two weeks ago.

With commercial banks in Guyana having a total of 41 branches- 12 of which are Republic Bank’s- he said the banking sector needs to do expand its reach further eastward and mainly westward as well as the interior areas to drive economic development.

Observing that Port Kaituma and Lethem have banks to which residents have to make costly overland trips to transact business, the President called on the banking sector to maximise the use of technology such as mobile money to break down barriers to offer their services.

“Commercial banks are encouraged to find innovative means and instruments of expanding their services to hinterland communities. The lack of banking services to un-served areas presents a serious constraint to income generation activities. It is also a factor which limits economic development of those regions,” he said.

He acknowledged that due to the smallness and remoteness of some mining, logging and savanna communities, banks would not find it viable to establish bank branches in those areas and so mobile banking appeared an attractive option. “Guyana, therefore, -more than other Caribbean states, a mainland state needs to develop systems adapted to its geographical reality. One size does not fit all for us. Mobile banking has proven to be very successful in expanding access to financial services in many countries and I’m sure it will improve custom as well,” said Granger. 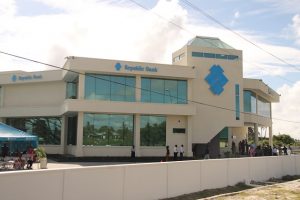 He noted that the opening of the Republic Bank branch at Triumph, East Coast Demerara has come at a time of democratic renewal at Local Government Elections that were held last year for the first time since 1994. He expects that the local government system, including the establishment of capital towns, would stimulate easier access to financial services, enhanced household welfare, facilitate small business activity and increase the incomes of the poor and disadvantaged.  “The opening of this branch, therefore, will promote the goal of increased financial inclusion which is one of the key objectives of our government,” he said.

Chairman of Republic Bank (Guyana) Limited, Nigel Baptiste says research influenced the bank’s decision six years ago to construct a branch at Triumph to cater for customers who are normally served by branches at D’Edward and Georgetown. “Our journey to this juncture commenced six years ago, as a consequence of ongoing customer engagement and feedback, together with a feasibility study, all of which provided a very convincing indication of a need for us to offer the Republic Bank brand and suite of products and services to this community,”  Baptiste said in remarks. He added that Republic Bank is expanding in keeping with trends shaping the local, regional and global economies. “Of not among local developments are increased opportunities for home ownership; expanding small and medium businesses; growing confidence in Guyana’s economic prospects and, by and large, customers with sophisticated banking needs and high expectations,” said Baptiste.

Republic Bank, he said, has high among its priorities building and solidifying its relations with the community as a financial services provider and supporter of social development.

Republic Bank’s Triumph branch, which began operations on December 19, 2016, is staffed by 32 persons.  It is the second largest Republic Bank branch – 24,143 square feet- after its branch of Water Street. Construction commenced on August 3, 2015 and was completed on November 17, 2016.