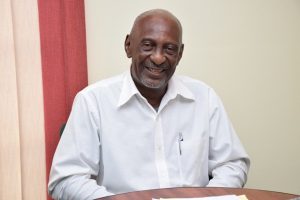 Government has allocated $24M to the Guyana National Cooperative Union Limited (GNCU) under the Labour division of the Social Protection Ministry sparking many questions on the body supposedly located at Waterloo Street between Middle and Quamina Streets.

Opposition MP Juan Edghill questioned Labour Minister Keith Scott in the Supply Committee of the National Assembly on what criteria was used to facilitate the allocation.

Another MP from the opposition benches, Jillian Burton Persaud, asked Minister Scott to justify the $24M allocation to the GNCU, and whether that money could not be better used by the Guyana Trade Unions Congress (GTUC), and the Federation of Independent Trade Unions of Guyana (FITUG).

“You would recognise the virtual impotence of those two bodies,” Minister Scott responded about the trade unions to much shock from the opposition benches. Prime Minister Moses Nagamootoo then turned to Minister Scott, sitting right behind him, seemingly giving him a gesture of disapproval.

Minister Scott could not tell the National Assembly who were the Principles of the union, insteading opting to provide that information to Opposition MP Edghill at a later date. He did provide a location for the coop union.

Edghill sought further information questioning what representation was made to Minister Scott for the union, and what reasons were given to necessitate $24M in funding from Guyanese taxpayers.

Attorney General Basil Williams was seen in the corridors of Parliament engage Minister Scott on the GNCU, and its intention. When Demerara Waves Online News approached the AG, he directed to the Chief Cooperatives Officer.

The Chief Cooperatives Officer is responsible for the supervision, regulation and quality control of all functioning cooperative unions.

According to a July 7, 2012 Stabroek News letter written by one, C. Conway, the GNCU Limited is a body made up of coop unions across the 10 administrative regions, who then elect their representatives to sit on the Board of the Directors for the GNCU.

Minister Scott identified the GNCU as an umbrella organisation, however, he could not list the organisations under the ambit of the GNCU.

Asked by Opposition Chief Whip Gail Teixeira whether the GNCU was compliant with the Anti Money Laundering laws as well as the Cooperative Society Laws, Minister Scott responded in the affirmative saying they were compliant.