After a tense exchange of words in the National Assembly between Opposition MP Anil Nandlall and Public Health Minister Dr George Norton over the content of the controversial $12M monthly Sussex Street bond, the National Assembly’s Speaker Dr Barton Scotland was made to put his foot down and set up an investigative team to visit the storage bond while the Thursday evening debates continued.

Opposition MP Nandlall made a position during the budget debates that no drugs were being stored at the bond. It could be recalled that Public Health Minister Dr George Norton was expected to come before the Privileges Committee of the National Assembly for misleading the Assembly on the arrangements for the Bond.

The Speaker urged for one representative from both sides of the House to accompany Parliament staff to the Sussex Street bond around 8pm this evening to set the record straight. Government’s Chief Whip Amna Ally chose Social Protection Minister Volda Lawrence, while the Opposition’s Chief Whip, Gail Teixeira singled out Opposition MP Irfaan Ali.

The vehicles were loaded and the team set off to the Sussex Street bond. The media followed in hot pursuit.

At the site, Sussex Street residents flocked around the commotion as Government Ministers Volda Lawrence, Dr George Norton, and Dr Karen Cummings stood outside for about 30 minutes awaiting the Public Health Ministry’s Permanent Secretary, Trevor Thomas, who reportedly brought the keys to the bond from the Ministry. 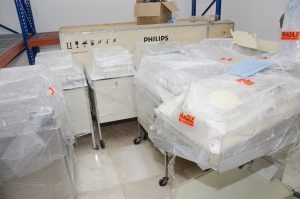 Heavy equipment stored at the bond

Also standing outside the Sussex Street bond were Opposition MPs Bishop Juan Edghill, and Irfaan Ali. The Opposition MPs threatened to leave after the bond remained closed for some while before the entire team including the National Assembly’s Deputy Clerk, Hermina Gilgeours, and other parliament office staff made their way into the two-storey storage bond.

After inspecting the two-storey bond, it was found that the upstairs stored boxes of umbilical cord clamps, latex condoms, lubricant, and IDU kit insertions, while the downstairs space was used to store heavy medical equipment including incubators, a pharmaceutical forklift, and a number of refrigeration units including one sub-zero unit.

Minister Volda Lawrence flew into a frenzy after Ali’s position calling it victimisation of Dr George Norton. Public Health Ministry staff then asked the media to leave the upstairs of the bond as Opposition MP Juan Edghill stood his ground declaring it was a public space. 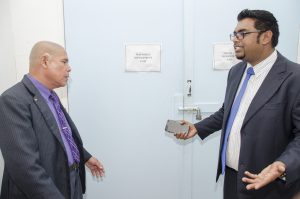 After returning to the National Assembly, the Speaker asked Opposition MP Ali to orally present his report, followed by Minister Lawrence.

In an effort to resolve the issue of what was really said by Opposition MP Nandlall during his presentation, Speaker Dr Scotland asked for a recording to be played in the National Assembly to clarify that position.

Nandlall was asked by the House Speaker to recall his words during his budget presentation. “My collection is that I said that there is not even a tablet in the bond,” Nandlall responded to the Speaker.

When it was the Public Health Minister’s turn, he recalled asking Nandlall “to withdraw his statement since the bond was being utilised.”

When the recording was played, it was revealed that Nandlall had stated two things: “my information, Sir, which is reliable is that no medication is stored at this bond.” When pressed by the Speaker whether or not he had any proof that anything was stored there, he said “my information is that the bond is not in use.”

Norton had moments earlier said that medication was being stored in the bond. The House Speaker then acknowledged that when he asked the bipartisan team to visit the bond it “was to ascertain whether the bond was occupied, in use or not.”

After the recording was played and replayed multiple times, Public Security Minister Khemraj Ramjattan stood up in the House to suggest that a transcript be presented to the National Assembly Friday morning so that it could be read by both sides and the Speaker could then make his ruling.

Ramjattan’s proposal was favoured by Speaker Dr Scotland as well as Prime Minister Moses Nagamootoo. Opposition MP Gail Teixeira objected to the proposal indicating the recording is clear urging for the Speaker to make his ruling.

“I, as Speaker, can hear much of it, but I don’t hear all of it. That is why I believe a transcript or some other way to clarify that could place me in a position to clarify it,” Dr Scotland said in response to Teixeira’s objection.