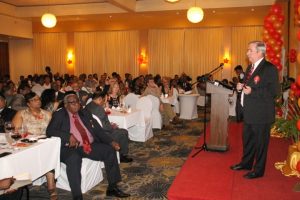 ExxonMobil has dismissed suggestions that Guyanese are not being hired, and has announced a plan to train and recruit locals for ongoing preparatory work and actual commercial production.

Country Manager, Jeff Simmons said the evidence shows that ExxonMobil is not interested in importing foreigners instead of Guyanese. “One common mis-perception is that we don’t want to have local content, we want to bring a bunch of people in to do this and that’s definitely what we don’t want to do,” he told the Guyana Manufacturing and Services Association (GMSA) awards ceremony and dinner.

He added that his company was working to develop a pool of skilled personnel and service providers to ExxonMobil’s standards. Among those being targeted are drillers, caterers and welders.  “We need to work with our contractors and government to develop the training apprenticeships and curriculum in the local institutions that will support the skills and talents that we need,” said Simons who has worked for more than 30 years with ExxonMobil.

Simons said already ExxonMobil has hired several “really, really good people” who will be trained to put the ExxonMobil “stamp on their foreheads.”

Latest figures show that the American oil giant has so far spent US$700 million dollars dating back to 1999 when the company first secured the Stabroek Block concession. Of that amount, Simons said US$100 million have been spent locally to purchase goods and services locally.

During the third quarter of 2016, he said 325 of the 670 persons who were working for ExxonMobil are Guyanese.

Projections are that 500 to 600 workers would be coming to Guyana to install wells and other equipment. “We are looking to get some drilling contracts entered into early and try and develop some drilling expertise here locally in Guyana. We are working with a couple of different vendors who are starting to do some capability building and thinking about some courses that could be useful for starting drilling basically,”

At the production stage, he announced that the 60 to 80 workers would be mentoring Guyanese who would eventually take over from their foreign counterparts. “The production operation will be very much dominated by local content” said Simons.

The Guyana government intends to pass local content legislation that would guarantee the employment of locals in oil and other natural resource extractive industries.