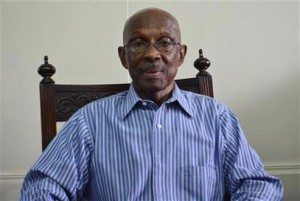 Government is preparing to give former Prime Minister, Hamilton Green possibly more than GYD$1 million pension and other benefits, a move that has already set the David Granger-led administration on a collision course with the opposition People’s Progressive Party Civic (PPPC).

When Parliament meets on November 21, Finance Minister Winston Jordan is expected to table a Bill to ensure that only Green, who served as Prime Minister from 1985 to 1992 to receive the pension, in addition benefits and other facilities “to enable him to live in keeping with the high office he occupied.”

Green welcomed government’s decision, saying he has long been entitled as Guyana’s second constitutional office-holder, but he was never made a parliamentarian in 1992 due to his “problems” with then People’s National Congress (PNC) Leader Desmond Hoyte and the PPP never passed legislation for former Prime Ministers to receive pensions and other benefits. “It is an entitlement and I don’t see why I should refuse it. I have been skimping for years on little or nothing. I rely on my children and my wife,” he told Demerara Waves Online News. “It’s the just and decent thing.”

Green said he has been “punishing for years” on a parliamentary pension of GYD$100,000 per month based on the

However, the PPPC contends that this is a glaring evidence in which the People’s National Congress Reform (PNCR), Green’s party, is paying back its supporters.

PPPC Chief Whip Gail Teixeira on Tuesday lashed out at government’s moves to give Green a pension, benefits and other facilities. “It is a vulgar, wicked piece of legislation, and a bold-faced move for one person alone when it has been unable to offer sizeable increases to the public servants, sugar workers and others,” she said.

“The gentleman has not been a member of Parliament for 20-odd years . I am sure he has been receiving a Parliamentary pension and other benefits including those he received from being Mayor of Georgetown.

Green was Mayor from 1994 to 2016, after he won a huge chunk of sympathy votes at 1994 general election when he was expelled from the PNC following a disciplinary committee hearing. He had openly blamed Hoyte for the PNC’s defeat at the 1992 general elections and had gone as far as calling him a political “schoolboy”.