Use of date-rape drugs on the rise; “When you go out, do not take drinks from people…” DPP warns 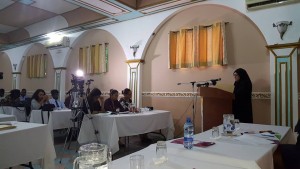 Guyana’s Director of Public Prosecutions (DPP), Shalimar Hack on Wednesday warned Guyanese against consuming drinks from people they barely know because of the increasing use of date-rape drugs.

“When you go out, do not take drinks from people because some of these people they offer them drinks and in the drinks is substance, they lose consciousness, they wake up in a hotel room…,”  Hack told a half-day sensitization session for media workers.

The DPP called for public awareness about the use of date-rape substances which, she said, is against the Sexual Offences Act because it causes the person to become stupefied and overpowered at the time of sexual activity.

Hack expressed concern at the frequent use of date-rape substances on victims who are invited to go on a date rather than have sexual intercourse. “This thing is happening a lot in Guyana and I think it is not being advertised enough for the young people to know,” she said. “I have been seeing so many files like that so I think we need to start sensitizing our young people and I have no doubt in my mind that this is happening to men too who are complainants- that they are being drugged by their potential offenders,”  she said.

The country’s Chief Prosecutor, who heads a team that advises police on whether suspects should be charged, related a case in which a woman had been lured into a hotel in Georgetown where here genital was mutilated. “After that (entering the hotel), she did not remember anything more but she woke up the next morning in the room alone and she was bleeding,” Hack said. “When I saw that medical (certificate), someone took a razor or a knife or something and slashed her down there. It was like several cuts that she had down there,” the DPP said, adding that the woman took months to heal.

Hack said the woman could not recall who did because she was last in the car with him, while he claimed that they had sex and he left her in the room. Hack suggested that the hotel staff did not cooperate fully.

The DPP said her “gut feeling” was that the man had put something in the woman’s drink but she had no evidence on which to charge him.