Integrity of new Oil and Gas Association boss under microscope 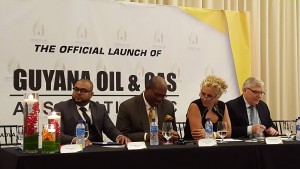 Less than one week after the Guyana Oil and Gas Association (GOGA) was formally launched, the future of it President and Chief Executive Officer, Bobby Gossai Jr. hangs in the balance after reports surfaced that he was named in a recent government-sponsored forensic audit.

GOGA said in a statement that it was unaware of the “specific contents” of the Audit Report referred to in the Kaieteur News article. “The Board of Directors has since secured a copy of the Audit Report and will be considering the contents of the report as a matter of urgency,” the organisation said.

Gossai is a former employee of the Ministry of Natural Resources.

GOGA noted that Gossai, who was employed as part of its start-up process, is still on probation and “this period has not yet come to an end.”

“The Board would like to assure the public that it is committed to the highest levels of transparency and disclosure in its efforts to develop a viable successful Oil and Gas Industry in Guyana,” GOGA’s Board said.

Assurances of transparency came just three days after that was highlighted as one of the key ingredients in the hydrocarbon sector. Guyana is expected to begin commercial oil production in 2020.