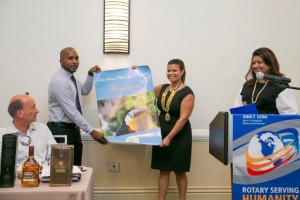 GF’s Managing Director, Anthony Autar, handing over a thank you gift to the President of the Rotary Club of Grand Cayman, Katherine Tathum.

Hague Back, Guyana – (October 11, 2016) The Guyana Foundation recently announced that the pilot phase of its Sunrise Center on the Essequibo Coast was successfully completed.

This announcement was made last week at the Westin Hotel, Grand Cayman, during a presentation by the Foundation’s Founder, Mrs. Supriya Singh-Bodden, C.C.H., and its Managing Director, Mr. Anthony Autar. In attendance were members of the Rotary Club of Grand Cayman, and various other donors, who had provided funding for a significant portion of expenses to launch the Center.

According to Mrs. Singh-Bodden, the Sunrise Center is part of the Foundation’s on-going efforts to provide urgently-needed training, counseling and support services to individuals and families across Guyana. She highlighted the Foundation’s hopes to open other Centers in Guyana shortly.

Meanwhile, Mr. Autar explained that during the pilot phase, the following services and programs were offered free of charge to residents of the Essequibo Coast: 1) professional counseling and mental health support services accessible 6 days a week in a confidential, comfortable environment; 2) holistic wellness activities such as yoga and; 3) skills training courses in the areas of fabric design, electrical installation, catering and floral arrangement. Goals and motivational seminars by overseas-based Guyanese professionals are also available.

Most of the facilitators, and the mental health counselors are from the Essequibo Coast, in keeping with the Foundation’s desire for the Center to be grassroots-based.

Autar indicated that during the pilot phase, one-on-one counseling and follow-up support services were provided to many individuals, while group sessions of varying sizes were also held with others. Additionally, informational sessions on mental health topics were conducted with students enrolled in all the skills-training courses at the Center. 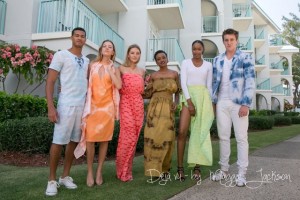 Models wearing the line of clothing made from Sunrise Center fabric design material.

Upon the completion of the presentation, the audience was treated to a fashion display by models wearing a line of clothing created from fabric produced by the Center’s fabric design class. Mrs. Singh-Bodden disclosed that a fashion house in the Cayman Islands has placed an order for all the fabric designed by the Center’s students, creating gainful employment for these individuals.

Guyana Foundation will now set up a small fabric printing workshop at its premises to assist the fabric designers to get started until they can go out on their own.

The Center will be officially opened shortly and new courses will begin in November. Mrs. Singh Bodden made an appeal for more organizations, and individuals both in and out of Guyana to come on board to assist with this aspect of the Foundation’s work.

She stated that “in order for Guyana to build a healthy investment climate the wellness of it people is absolutely the most important priority. We cannot be registering and reporting deaths by suicide in our newspapers then telling the world we are open for business. We need to fix this problem and give it the priority it deserves.”