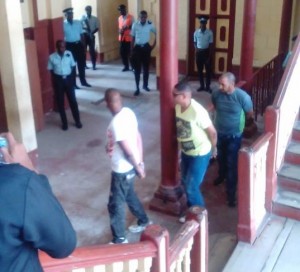 City Magistrate Judy Latchman on Tuesday ordered three Cubans to post bail at GYD 80,000 each after they appeared in court on fraud charges.

It is alleged that on October 9, 2016, at Moleson Creek, Corenteyne, Guyana with intent to defraud, Osmel Guirola-Aboscol, Andy Perez Rodriguez, and Alain Perez Rodriguez each uttered to Police Constable 22400 Carol their Cuban passports – numbered 1357761, J132153, and J132151, respectively.

The passports contained (on pages 4&7, 5&6, and 5, respectively) forged immigration stamps, which the three accused allegedly purported to have been installed by Immigration Officials at the Cheddi Jagan International Airport (CJIA), knowing same to be false.

When asked by immigration Spanish translator Stephanie Mohan-Singh how they pleaded to the charges, they each stated, “no culpable” (not guilty).

Speaking on the Cubans’ behalf, Attorney Melvin Duke stated that his clients entered Guyana legally and were granted permission to stay until October 17, 2016. He said they all reside at lot 234 Garnett Street Kitty.

Counsel Duke explained to the court that the trio was approached by an individual who offered to have their stay extended legally. As such, Guirola-Aboscol (a driver), Andy Perez (a chef), and Alain Perez (a salesperson) handed over their documents to the individual to make the changes. He added that the travel documents in question are in police custody and as such his clients cannot leave the country.

In his turn, Prosecutor Vishnu Hunt did not object to bail, and confirmed that the prosecution did in fact have the passports in custody. In response to this confirmation, the magistrate asked Hunt on what basis or authority is the Guyana Police Force holding on to the travel documents, which rightfully belong to the Cuban government. She said the prosecution should have lodged the passports at the respective consulate office. Following this, the matter was stood down for a few hours. When it was recalled, the prosecution made an application for the passports to be forwardedto the Cuban Embassy, where they are to be held pending the outcome of the matter.

The magistrate conceded to that and ordered that the documents be kept, in the interim, in the safe custody of the Georgetown Magistrates Court until the Cuban Ambassador to Guyana or someone delegated by the Cuban Embassy in Guyana uplifted them.