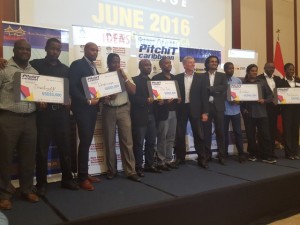 A burgeoning Guyanese Information Communications Technology (ICT) company has secured financing for a project of its choice.

Directory.GY is one of five winners of the PitchIT Caribbean Challenge which wrapped up on Saturday in Montego Bay, Jamaica.

The lone Guyanese mobile application triumphed over 20 other regional mobile applications for one of the five coveted spots that would secure start-up tech companies US$5,000 in seed funding among other prizes.

IntellectStorm is Directory.GY’ s parent company and its CEO Rowen Willabus feels this is a major step for young Guyanese in the field of  Information Communication Technology (ICT). “To have a Guyanese innovation selected as a winner in the first PitchIT Caribbean Challenge is an honour, not for me but for youth and ICT push in my country. This is a win for those with solutions, to inspire them to swim against the tide in their belief of betterment for our country” he said.

Directory.GY was represented by Willabus and Marketing Director Ronson Gray. They both underwent a two day training session in Jamaica in preparation for the PitchIT Caribbean Challenge which also lasted for two days. That saw rigorous presentations to two panels of judges with backgrounds in investment, financing and ICT.

Directory.GY ,which was launched in May in collaboration with the Ministry of Public Telecommunications was branded the Official Mobile Application for Guyana’s 50th Independence Anniversary.

PitchIT Caribbean Challenge was launched under the Caribbean Mobile Innovation Project’s (CMIP). CMIP is part of the Entrepreneurship Programme for Innovation in the Caribbean (EPIC) and is executed by the University of the West Indies Consortium which consists of the UWI Consulting Inc., Mona School of Business and Management (MSBM) and the Mona Business Support Services (MBSS). PitchIT Caribbean Challenge is funded by the Government of Canada and executed by the World Bank