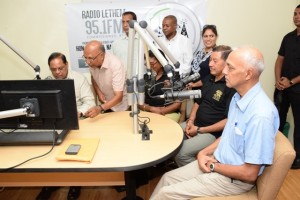 Immediately following this, the first interview was done on air with the high-level government team that was in attendance.

Addressing residents of Lethem, regional officials, government ministers and representatives from neighbouring Brazil including the Mayor of Bonfim, Prime Minister Nagamootoo remarked that it was a historic day for the people of Lethem and all Guyanese that a radio station was being commissioned in an interior community.

“It is important for the people of the hinterland to have a radio station, so they can communicate with themselves in the region and the rest of Guyana, and for them to know what’s happening,” he told the gathering.

The Prime Minister who has Government’s responsibility for the media and the broadcasting sector, explained that the creation and establishment of community radio stations is the start of a new beginning where his administration is seeking to connect Guyanese despite geographical locations. The establishment of the radio station is one way of bridging the gap and closing the communication divide.

The Prime Minister, speaking of the involvement of all Guyanese in the country’s advancement,  stated that all indigenous communities must be part of the process. “No one  nor community should be left behind,” he asserted.

Prime Minister Nagamootoo reminded those gathered that his Government promised Guyanese that the coastland and the hinterland will be integrated and the radio station is one of the ways of achieving this.

In paying tribute to those persons who can be deemed icons of broadcasting, the Prime Minister  recalled some of the prominent broadcasters of old times whom he explained played a great role in the sector’s development.

Meanwhile, Regional Chairman, Region Nine, Brian Allicock told the gathering that it is always good to know what’s happening on the inside, but most importantly,  on the outside.

“I am so happy to tell you that we are on the right path of communication as this is critical. I thank this Government very much for that radio station and in time to come a television station,”  he said.

The Regional Chairman called on his fellow residents to continue to work for the further development of the region despite their political differences.

In his remarks, Mayor of Lethem Carlton Beckles expressed appreciation to the Prime Minister and team for the establishment of the radio station an promised that it will be used for its intended purpose.

“This is historic, this is a jubilee within a jubilee. This brainchild of the Prime Minister will assist us with information and help us get on the right track,” the recently elected Mayor said.

Delivering remarks, National Communications Network’s (NCN)  CEO, Lennox Cornette told the gathering that NCN is currently reviewing its Georgetown centre’s orientation in an effort to extend its reach by moving away from a central focus to communities to promote values in Guyanese citizens.

Cornette advised that, “this is the first expression in a community radio model so we can disseminate information from the region to central and from central to the region.”

He thanked the Prime Minister for his foresight, visionary thinking and risk-taking in the establishment of Radio Lethem 95.1 FM.

Providing a brief history on the Community Radio Project, Communications Consultant and Project Coordinator, Dr. Rovin Deodat said discussions on the project commenced nine months ago with the Prime Minister who wanted the creation of this radio station within the shortest possible time.

“He wanted to get valuable information out to Guyanese in all communities across Guyana,” Dr. Deodat noted.

Meanwhile, 12 young persons from within the region were trained as community broadcasters.

“These young people now have a chance to express themselves,” he stated.

During the inaugural interview on Radio Lethem, Minister of Public Telecommunications Catherine Hughes stated that she was very pleased that the youths would be able to develop themselves in the field of broadcasting overtime as the radio station will facilitate the process.

To this end, the Minister pledged a donation of 15 laptops to the young broadcasters. This will be sent to the region at the earliest.

Welcoming the radio station in his home town and region, Minister of Indigenous Peoples’ Affairs Sydney Allicock said it is an initiative that’s long over due and he is very happy now that it has finally been realised.

Speaking to the issue of creating cohesive communities and, highlighting the fact that Lethem now has township status, Minister of Communities, Ronald Bulkan explained that the administration is ensuring that the necessary infrastructure is in place, along with the requisite services that come with a town. The radio station, he said, is one of those needed services.

At the conclusion of the official ceremony, Prime Minister Nagamootoo distributed 20 radio sets for communities within the region. The respective toshaos collected these.

Radio Lethem is one of two radio stations the administration is establishing in its quest to link the hinterland with the rest of Guyana. Radio Mabaruma is scheduled to be officially commissioned shortly.

Lethem is one of the 56 communities in Region Nine. Currently it has population of 5000 people, 150 households and 100 businesses.