Big plans in pipeline to deal with autism in Guyana 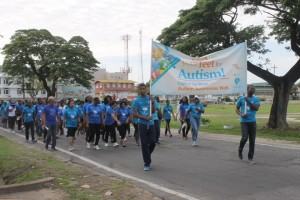 GET ON YOUR FEET FOR AUSTISM

As plans continue for the construction of a school for autistic children, Minister of Education Dr. Rupert Roopnaraine on Saturday announced that a curriculum would be developed for that category of learners.

Republic Bank (Guyana) Limited, at the same time, called on authorities to generate statistics on autism in the country.

“On the completion of that facility (school), we will also provide the necessary human resource support for it to function properly. In other words, special training in autism will become part of the curriculum at the Ministry of Education,” he told the estimated 200 persons who participated in the walk through the streets of Georgetown.

A plot of land has been already identified at the Cyril Potter College of Education (CPCE) for the construction of the school by the Step by Step Foundation, a registered charity. Chairwoman of the foundation’s executive committee, Dr. Suraiya Ismail said the special education institution has increased its capacity over the years but it still needs more space and teachers to better serve autistic children in Guyana. 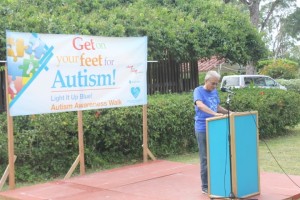 Ismail said 40 autistic children are on the waiting list but the Step by Step Foundation could  not accommodate them now. “We cannot admit them because we do not have the space and we do not have the funds to employ more tutors,” she said.

When the school opened its doors in 2011, it started off with five children and three tutors but today it has 19 children and seven tutors. “Children who never spoke are speaking now or communicating with I-Pads or pictures. Some can read or do maths. We teach them life skills so that they can live more independently but this is not enough,” she said.

Acknowledging that the Step by Step Foundation could not meet the needs of autistic children countrywide, the Director of the Step by Step Foundation said her organisation was working with the Ministry of Education to train public school teachers. “They have agreed to provide us with teachers who we would train and then they would go back to their own schools to continue the management of autism,” she said. 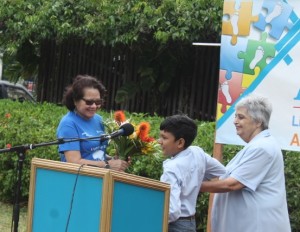 First Lady, Sandra Granger received a bouquet from a student of the Step by Step Foundation. At right is the foundation’s Director Dr. Suraiya Ismail.

Now that the land has been allocated at CPCE, Turkeyen, efforts are being made to raise funds for the construction of the school.

With no official statistics on the number of autistic children and other persons in Guyana, Manager of Marketing and Communications at Republic Bank (Guyana), Michelle Johnson urged Guyanese authorities to acquire the numbers to better understand the complex disorder that affects communication and behaviour and causes persons to be labeled as misbehaved or slow-learners. “If we are to really make a difference for persons and families with ASD (Autistic Spectrum Disorder) in Guyana, it is important that we find a way to know and understand our statistics and importantly what these numbers and trends mean for us as a nation. ASD is a health issue with long term social implications, and we have to find ways to do all that is in our power to create inclusive communities that address ASD needs,” Johnson said. She also appealed for greater awareness of the disorder that has impacted on parents, caregivers and sons, daughters and young charges.

First Lady Sandra Granger, who is patron for Step by Step Foundation, praised Republic Bank (Guyana) Limited’s Social Investment Initiative for supporting efforts to cope with autism. She added her voice to calls for greater integration of autistic children. “We need to start thinking about how we can bring those children into the system and see their special needs and also their special gifts and work with that,” she said.

Republic Bank (Guyana) Limited says it was first inspired by the efforts of its parent company, Republic Bank Trinidad, which since 2008 has been part of the fight against autism. “It is this strong drive that led us to seek out an approach the Step by Step Foundation when we learnt of their existence in 2012,” Johnson said.

Representatives from Republic Bank (Guyana) Limited, Digicel, Banks DIH and John Fernandes Limited were among those who participated in the Autism Awareness Walk under the theme “Light It Up Blue” to kick off a month of activities. Public Security Minister, Khemraj Ramjattan also participated in the walk.

Previous: Second Charlestown man gunned down in three days
Next: Did Party Politics trump Democracy at the Georgetown City Council?