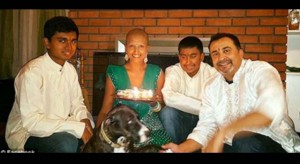 Team effort: Deokaran is pictured here with her two sons and her boyfriend.

New York (New York Daily News) – A New York woman whose battle with leukemia united her community behind her is under investigation after skipping town, police said Saturday.

Residents around Ardsley village in Westchester County donated over $60,000 to Shivonie Deokaran and her family after learning in August she had only 18 months to live, The Journal News of the Lower Hudson Valley reported.

Deokaran’s boyfriend denies any allegation that she could be faking her terminal cancer.

Yet the couple moved with Deokaran’s two children to Florida last month after investigators working on a tip, asked for her medical records, a police source told WCBS-TV.

Ardsley police, who have confirmed an investigation, didn’t immediately respond Tuesday night to requests for comment.

“I just really hope that she was honest with everybody because it will make it much harder to raise funds for other people who desperately need to be helped,” Paul Feiner, the town supervisor of Greenburgh, which includes Ardsley, told the News Journal. “I put her situation on the town website and, within 24 hours, we raised probably $12,000.”

Other efforts included a GoFundMe page called “Shivonie’s Fight Against Leukemia” and a spaghetti dinner organized by her son’s Ardsley High School football team in November.

Deokaran, who was born in Guyana, and her boyfriend, Nikhlesh Parekh, ran a struggling restaurant called Samosa Cafe in nearby Dobbs Ferry.

“It’s unfortunate someone with cancer has to prove to anybody they have cancer,” Parekh told the News Journal.

He said the family moved because New York weather is too cold for Deokaran in her condition.

He said that she gave her medical records to people who had supported the family when rumors began swirling around the small town.

Carrie Spiro, who lived next door to them on Virginia Street, called the rumors “pretty disgusting” in an interview with the newspaper.

“She was stuck in her house for periods of time and was too sick to care for her children and her dog,” Spiro said. “The bills for her treatment were insurmountable. Nik started a car wash business and was out there busting his butt washing cars to pay those bills.”

Yet Rob Wootten, whose son also plays on the football team, told the News Journal, it would be “deplorable” if the fundraising efforts are proved a scam. Wootten helped arrange the spaghetti dinner held at the Ardsley village firehouse.

“I’m not a rich guy,” Wootten said. “The only thing I could donate was time and that’s what I did. If it’s true, it’s a shame. No one was physically hurt, but for the kids and all the people who volunteered their time, it’s a shame.”