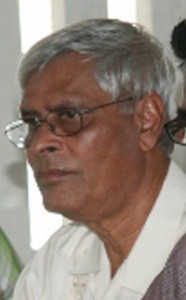 Former Chief Planner at the Ministry of Finance, Clyde Roopchand has died, bringing two the number of prominent Buxtonians who have passed away in less than one week.

Demerara Waves Online News was told that Roopchand died in New York on Thursday (March 30, 2016), three days after Haslyn Parris died at a hospital in Guyana after suffering an aneurysm.

Finance Minister, Winston Jordan remembered working “closely” with Roopchand at the State Planning Secretariat and the Ministry of Finance, along with then Finance Minister Carl Greenidge and former Bank of Guyana Patrick Matthews in “putting together the Economic Recovery Programme.” “We were like the core team back in the mid-80s trying to put together a programme to bring Guyana back,” he said.

Parris had also worked at the State Planning Secretariat along with Roopchand. Several years ago, a street in the East Coast Demerara village of Buxton was named after Roopchand.

2016-03-31
Denis Chabrol
Previous: “Is half a million dollars honorific” – Teixeira calls out Gov’t on shady appointment of advisors
Next: No need for new laws to protect LGBT Community – Bar Association President