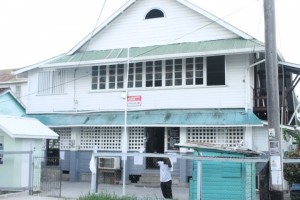 No queue up to 7:15 AM at a polling station at Kingston Secondary School, Barrack Street.

Voters were Friday morning trickling in to polling stations across several areas of Guyana to vote in Local Government Elections for the first time since 1994.

“The process is fast and smooth. Lines are short and people are going in but it is not the kind of build-up like General Elections,” a resident on the East Bank Demerara who just returned from voting told Demerara Waves Online News.

The 1,562 polling stations opened at 6 AM and will close at 6 PM. The Guyana Elections Commission (GECOM) says 507, 633 are registered to vote  for representatives of three political parties, 17 voluntary groups and 63 individual candidates in a mixed system of Proportional Representation and First Past the Post.

Local polls are constitutionally due every three years, but they have been delayed for several decades due to a number of reasons including the need for legal reforms to make the system more responsive to the needs of communities.

“The turnout has been poor at most places for the morning session,” one voter noted. Another usually reliable source described the turnout as “low, very low.” “All along the East Bank where, for General Elections you would have seen pockets of voters, (now it is ) none,” he said.

At Zorg Nursery School, Essequibo Coast, a voter told Demerara Waves that “when I went there no other person was seen there to cast his or her vote.”

Government has decided against declaring Friday, March 18, 2016 a national holiday for electors to cast their ballots. There was also a low turnout by members of the Disciplined Services who voted one week ago.

President David Granger has already voted and Opposition Leader, Bharrat Jagdeo is slated to vote at 10 AM.