Prisoners take to Facebook to complain about meals, treatment 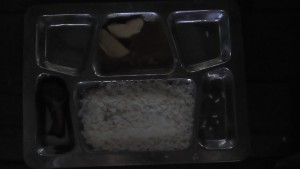 Even as a Commission of Inquiry into the Camp Street Prison unrest is ongoing prisoners from the Georgetown Camp Street are taking to social media to voice their concerns over the treatment being meted out to them at the prison.

Three known inmates of the Camp Street Prison have taken to social media, some to express their concerns about the current development at the prison, other just to be a part of the social networking online.

Inmates Carl Brown, Dennis Stephen, and Collis Collison all have Facebook profiles that can easily be accessed by entering their names on the social media website. 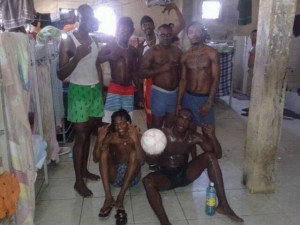 Inmates of the Camp Street Prison

The surfacing of these online accounts are particularly important when one takes into context that prisoners do not have access to cellular phones in the jail as statements given by inmates the a Commission of Inquiry into the Camp Street Jail unrest. 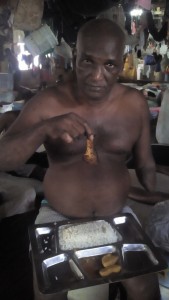 Holding up fish served to inmates

He described the meals as a “total disrespect to humanity,” said that prison inmates need to be fed proper meals that would consist of all their dietary requirements. 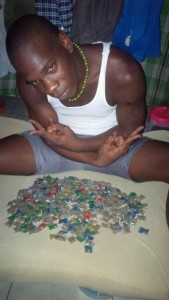 Collision and the bags of marijuana

His Facebook friends include several prominent persons from the private sector and civil society.

Over on the profile of Stephen, the inmate regular posts edited images of himself and his children and other items. He also shared posts that were published by his fellow inmate, Brown.

Collison’s Facebook profile displayed prison photos one of which saw him sitting with several bags of marijuana in front of him.

2016-03-18
Jomo Paul
Previous: “It was just one time sir” – prisoner confesses to taking photos while in jail
Next: NGO calls for President to boot Volda Lawrence from Social Protection Ministry