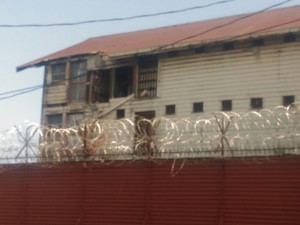 A section of the already weakened Georgetown prison wall that was kicked out by inmates Friday morning.

For a third day fire tenders have been summoned to the Camp Street prisons to counter fires that have been set by prisoners.

Reports indicate that around 07:00 on Friday morning prisoners continued their rioting lighting another mattress.

The fire service promptly responded and was able to out out the blaze. Four fire tenders still remain at the scene given the occurrences in the past few days.

Prisoners can be heard shouting and banging objects against their prison cells. They also kicked out an already weakened section of the southern wall of the prison. They claimed that teargas was being used to quell the unrest.

Outside of the prison, police and army have cordoned off the area to a two block radius.

On Thursday, 17 prisoners died at the prison and five were injured after the rioting started on Wednesday evening.

Five other inmates were so injured.

Prisoners are protesting a move by the administration to seize a quantity of cellular phones and weed from the inmates. (Jomo Brusheildon Paul)