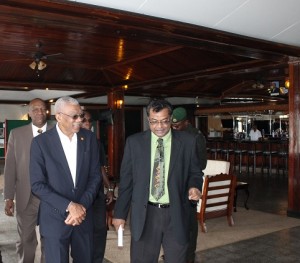 Public  Service Minister, Khemraj Ramjattan is confident that  Customs Anti-Narcotics Unit (CANU) would not be found culpable of  drug trafficking, in the wake of allegations made by self-confessed drug trafficker Barry Dataram.

“We were all there at the (National Security) Committee and we decided that , yes, once there is this allegation, whether it comes from a criminal, let’s have the committee….It is my view that, yes, CANU will be exonerated but, of course, let’s hear because off course I act on the presumption of innocence,” said Ramjattan, a lawyer by profession.

He doubted that the Head of CANU, James Singh would be sent on leave to facilitate the Board of Inquiry “I disbelieve all of them but that’s my opinion. It’s like Pablo Escobar saying that the Drug Enforcement Agency is not a good thing because off course he has interests but indeed we have to pay attention to what was said to clear it up and I want to believe that an enquiry would be the best way to deal with it.”

CANU comes directly under the Ministry of Public Security.

Speaking with reporters before the start of the 2016 Guyana Defence Force Officers Conference, Ramjattan said he disbelieved Dataram’s claims that significant percentages of drugs seized by CANU are sold on the streets and that at least one CANU agency takes as much as GYD$10 million to facilitate the smuggling of large amounts of drugs to the United States and Canada.

The Public Security Minister reasoned that Dataram, who is wanted by the United States (US) to face drug trafficking charges, has leveled the accusations against CANU because he was currently facing trial for the possession of more than 100 kilogrammes of cocaine at a house at Diamond, East Bank Demerara last year. “I have an opinion on it and it’s because there is a certain charge that is right now going on, he probably feels that it is about time to tarnish the CANU officials but we are going to have an inquiry and I hope that the inquiry is going to bring out the truth,” he said.

Ramjattan said government needed to pay attention to the claims and have them cleared up by a Board of Inquiry because the integrity and morale of the law enforcement agencies was vitally important. “That is what rocks your policing agency when the tarnishing, damaging comes and in this way it breaks the foundation of it. It kills and frustrates the officers and especially coming from fellows who are self-confessed drug dealers,” he said.

Police Commissioner Persaud said he was unsure whether Dataram would appear before the Board of Inquiry to give evidence but he (the Commissioner) was looking forward to its findings. “I don’t know how many persons, including Dataram, will cooperate with that,” he said. “The government has taken a position to have a Board of Inquiry commissioned to look into this matter and I await anxiously for the developments of that.”

Persaud assured that all drugs seized are tested in the presence of several respected officials before they are burnt or dumped into the sea several miles off the coast.  “The procedures we adopt to do these things are to clear any doubts that there is anything else being destroyed,” he said.

Dataram has said on HGPTV Nightly News that he would be willing to sacrifice his life to prove his allegations.

2016-03-03
Denis Chabrol
Previous: Prison Riot: Everything was done to save prisoners – Director; panel to investigate circumstances
Next: Fresh unrest at Georgetown Prison