Camera captures rare photos of Jaguar and her cubs in Guyana 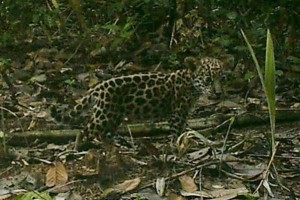 Camera captures rare photos of Jaguar and her cubs

Rupununi Wildlife Research Unit shared photos of the jaguars to Facebook that show the jaguar and her two cubs walking through a forest.

The photos represented the first time the group was able to catch a glimpse of the young jaguars on camera.

“Although we have had many pictures of jaguars over the course of the project and they are certainly breeding every year all over the interior, this is the first time that we have been lucky enough to catch jaguar cubs on our camera traps in the Rupununi,” they wrote.

The photos were gathered through a concerted effort between Rupununi Wildlife Research Unit and Jacksonville Zoo & Gardens, who sent team members to Guyana to monitor the big cats.