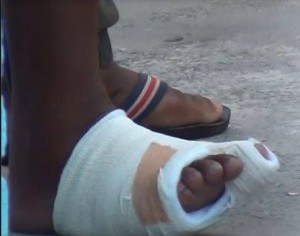 Even as two well-known opposition People’s Progressive Party Civic (PPPC) activists Wednesday night remained in police custody for an ongoing probe into the killing of political activist, Courtney Crum-Ewing, new details have surfaced about the allegations.

Investigators so far appear to be relying on a statement by Shawn Hinds that implicated Jason Abdulla and O’Kenny Fraser in the murder of Crum-Ewing in April, 2015 at Diamond, East Bank Demerara. At that time, Crum-Ewing had been on a loud-hailer urging residents to go out and vote for the now governing A Partnership for National Unity+ Alliance For Change (APNU+AFC) coalition in the May 11, 2015 general and regional elections.

A copy of Hinds’ statement was given to Abdulla to allow him an opportunity to challenge any aspect of it.

Attorney-at-Law, Glen Hanoman told Demerara Waves Online News  that his client, Abdulla, alleged that police covered his head and beaten on his soles.  Hanoman said at his insistence, Abdulla was taken to a city hospital where he was treated for injuries to his right foot and it was placed in a plaster cast.

Hanoman said a medical certificate that was provided by the doctor was rejected by police when Abdulla returned. However, according to Hanoman, police rejected that certificate and he was taken back to the hospital where a different certificate was allegedly demanded from the doctor.

The Attorney-at-Law said after diligent inquiries he learnt that the Guyana Police Force successfully obtained permission from the High Court for the continued detention of Abdulla, Shawn Hinds and Okelly Fraser  until Saturday afternoon.

High-level police sources Thursday said that Abdulla, Fraser and Abdulla confessed to lobbing a bowl of faeces on political activist and newspaper columnist, Freddi e Kissoon in 2010 near Nigel’s Supermarket, Robb Street. Investigators said Mc Coy was not actually involved in throwing the faces at Kissoon but was the master-mind.

Abdulla is a former employee of the Office of the President under the PPPC administration. Mc Coy is a former presidential spokesman and he is currently employed by that party at its radio station, Freedom Radio.

Meanwhile, the PPP suggested that government had a major role to play in the locking up of Abdulla and Mc Coy ahead of the March 18, 2016 Local Government Elections and the impending release of the Commission of Inquiry Report into the bomb-blast death of Dr. Walter Rodney on June 13, 1980.

“We regard this as another manifestation of a centrally directed plan to harass, intimidate, witch hunt and persecute PPP members, supporters and their leaders.

We had expected the persecution and harassment to be intensified as local government elections come closer and as the explosive Walter Rodney Commission Inquiry’s Report is about to be made public. These political machinations will not succeed as distractions which they are intended to be.” the PPP said in a statement.