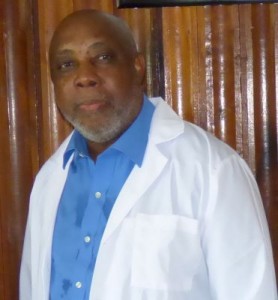 Blackman was recently appointed to chair the Board of the Georgetown Public Hospital Corporation (GPHC).

Agents took Noel Blackman, 68, into custody after they ordered a Guyana-bound jet taxiing for take off with Blackman aboard to return to an airport terminal.

The Herald Courier reported that federal agents were tipped off that the Guyana native planned to leave the country permanently and ordered a jet bound for the South American country to return as it was taxiing for takeoff.

Officials say $30,000 was stashed in the Far Rockaway doctor’s luggage.

Blackman was arraigned Monday in Central Islip on a charge of conspiracy to distribute oxycodone.
Records show he wrote 114 prescriptions in 2014 for about 3,800 oxycodone pills and nearly 2,500 prescriptions for about 365,000 pills last year.

Blackman, a major partner in HBTV Channel Nine, served as Health Minister under the then People’s National Congress-led administration of then President Desmond Hoyte.