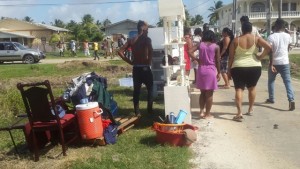 The few household items that were saved from the burning house.

A fire believed to be of electrical origin gutted a house at Non Pariel, East Coast Demerara, leaving seven persons homeless three months after they moved in.

An occupant told reporters that electricity supply was interrupted thrice during Sunday morning and early afternoon.  “I saw current come back on and about two minutes after, I smelled smoke and watched across the road to see if my neighbour burning something and when I watch back I saw fire in the middle of the hall,” he said.

The man raised an alarm, urging his siblings to evacuate the building which was engulfed by flames and smoke.  One of his brothers jumped through a window to the verandah at the rear of the house. He was not injured.

Their mother, Bevon Austin, was not at home at the time as she had gone to take her parents to a creek.