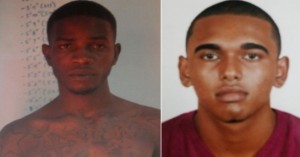 Even as police probe the discovery of the decomposed remains of man in the backlands of Alness Village, Corentyne, two men, including the god brother of a missing British youth, are wanted by police for questioning about his disappearance.

Police say they are looking for 22-year old  Aaron Wilfred Hing who is believed to be at Timehri in the vicinity of the Cheddi Jagan International Airport (CJIA).

Hing is the god brother of 18- year old Dominic Michael Lloyd Bernard who has not been seen or heard from since his arrival from the United Kingdom in October, 2015.

Hing has a British accent. He is of mixed race, fair skinned, bearded, has a low haircut and of 177 centimetres tall. Police gave his address as 19 Kildonan Village, Corentyne.

Earlier Friday, investigators said they found the badly decomposed and dismembered body of a man along with several items nearby aback Alness Village.

Police said a Government Pathologist was expected to conduct an autopsy at the location because the body is in a terrible state.

Previous: Gastro outbreak at Baramita kills one
Next: Nagamootoo gets high profile responsibilities