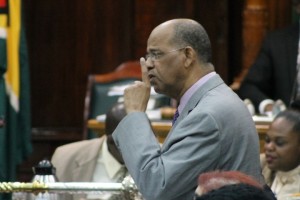 Former Home Affairs Minister, Clement Rohee Wednesday warned government that Guyana remains vulnerable to the entry of terrorists who had been fighting in the Middle East, but at the same time he urged there be balance with human rights.

“Let us not underestimate with all these foreign fighters and many of them are from Caribbean countries. There is a small possibility for terrorists ,not of home-grown type…of the type that we know that are moving around the world and are seeking climates, political too, to nestle and create the necessary cells as we saw like those who were in Guyana and plotting terrorist activities in the United States,”  Rohee told the National Assembly.

He was at the time contributing to the debate on Anti-Terrorism and Terrorist Related Activities Bill.

Rohee stressed that the PPP-Civic would always support Guyana’s participation in the global anti-terrorism fight.

He said one of the major challenges facing countries like Guyana is their lack of technical and human resources to enforce such a law.  “We must consider balancing enforcement and human rights of those who will be targeted and investigated.  Let us not overlook in our zeal and in our zest overlook the human rights issues that are connected in the fight against terrorism,” he said.

After government uses its one-seat majority in the National Assembly and the President signs it into law,  Rohee said the issue would be finding the right balance between combating terrorism and having the required resources to deal with persons who have been trained by ISIS, al-Qaeda and Boko-Haram and were now “traversing the Caribbean have a possibility of entering Guyana through its porous borders.”

Rohee, who is also a former Foreign Minister, called for more consultations and the crafting of a strategy to enforce the law.

PPP-Civic front-bencher, Gail Teixeira raised concerns about government’s inclusion of the mandatory death penalty in several sections of the Anti-Terrorism and Terrorist-Related Activities Bill although Guyana has amended its death penalty law that allows such a penalty in very few circumstances.

Guyana has not hung anyone since 1998.

Calling the Bill an “extraordinarily draconian piece of legislation,” Texeira questioned why “are we making it more stringent than the Criminal Law Offences Act.” She noted that similar legislation in Jamaica does not provide for the death sentence but life imprisonment.

She also noted that unlike Guyana’s legislation,  no one could be transferred or surrendered to another State from Jamaica without going through a “long court process.”

Previous: GPL managers to get increased salaries, allowances
Next: GAWU named as major contributor to downfall of GuySuCo