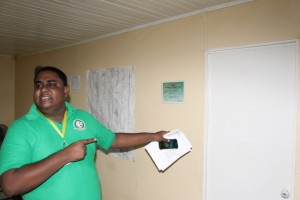 Aseef Balmacoon outside the Board Room of the Hope Coconut Industries Limited. He was prevented from entering the room by Board Chairman, Iamaei Aowmathi who was inside with a ranger armed with a shotgun.

A dispute has broken out over the appointment of an Administrative Manager for Hope Coconut Industries Limited, with the Chairman of the Board Iamei Aowmathi over-ruling a decision by Agriculture Minister Noel Holder.

Moments after the appointee, Aseef Balmacoon, was told again by Aowmathi to leave his office, he made an impassioned plea for President David Granger to intervene in the matter. “I, Aseef Balmacoon, who campaigned  for you to be President, Sir… are you going to allow a dictator who did nothing to put you in power to stop me  from performing my duties and I am a youth who campaigned to put you in power and you are going to allow a man like this to ban me? “Come on, Mr. President, you have to do something,” said Balmacoon.

Several Hope Estate farmers came out in support of Balmacoon with placards, demanding that the Chairman be booted from office and the Administrative Manager be allowed to perform his duties.

Aowmathi claimed that Balmacoon was a Power of Attorney for land at Hope Estate that is the subject of a Court of Appeal case and so his appointment as Administrative Manager would be a conflict of interest. “You would understand that you cannot employ someone on the estate whose family, for whom you are acting as a Power of Attorney, as a manager because it’s a direct conflict of interest,”  said the Chairman of the Board of Hope Coconut Industries Limited.  Aowmathi  is refusing Balmacoon from taking up his office also on the grounds that the Minister of Agriculture does not have the authority to appoint anyone and that the Board did  not appoint Balmacoon.

Aowmathi showed reporters a copy of an un-signed and un-dated ‘letter’ that he said he dispatched to Minister of State, Joseph Harmon on Monday, December 28, 2015.

Balmacoon said he resigned as a Director of Hope Coconut Industries Limited earlier this year to take up the appointment as Administrative Manager from December 1, 2015 to November 30, 2015.

In a letter dated December 17, 2015, the Chairman of Hope Coconut Industries Limited told Balmacoon that the appointment letter signed by the Permanent Secretary of the Ministry of Agriculture, George Jervis was illegal. Aowmathi argued that Jervis was not authorized by the Board to make appointments or perform functions on behalf of the company. “It means, therefore, that you are not a legitimate employee of the company and will not be allowed access to the Admin Office to perform the functions of Admin Manager, which is non-existent and fictitious, residing in the imagination of the Permanent Secretary,” said Aowmathi.